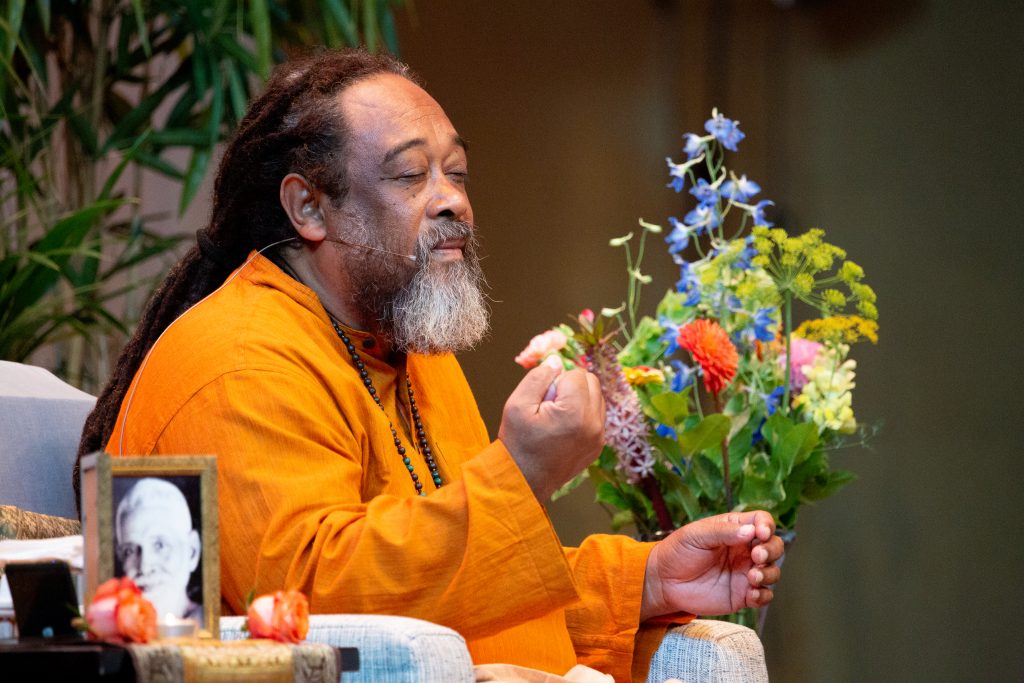 For many, Mooji, also known as Anthony Paul Moo-Young, is a spiritual guide who aims to help seekers of the Truth realize that ‘happy & free’ is our natural state of being. He accomplishes this by having us experience that, behind all our ideas, concepts, beliefs, feelings, thoughts, impulses, memories and expectations, we can come into contact with Who We Truly Are.

This True Self is the still Spectator inside us, that which is calmly aware of everything, That Which IS. We could attain this ego-less state of Being if we were to let go of all our identifications. It cannot be depressed, or anxious, or unhappy, or in a hurry … it just IS.

As such, going to see Mooji was certainly fitting for us as representatives of Stichting Gezondheid, which not only strives to help people with their physical health, but also with their emotional, psychological and spiritual health.

Prior to Mooji’s satsangs at the Philharmonie in Haarlem, we received a warm welcome from two serene-looking ladies dressed in ashram clothing. We were shown where we should sit. The hall was filled with people, a soft scent of incense was in the air and beautiful music was playing.

Everyone in the hall became enthusiastic when Mooji appeared. His face and appearance on their own were therapeutic enough: you could not help but feel happier, more cheerful and more In The Moment. Mooji had an easy smile and twinkling eyes and he radiated a pleasant aura of love. After sitting down, he took a few minutes to calmly take in all his attendees, as though he was wordlessly blessing everyone. Some people started sobbing or weeping.

Next, he told us he was going to help us let go of our identifications, to help us realize that we are vastness, tranquillity and emptiness, the reasons for the existence of life itself.

He asked us to let go of everything: our opinions, problems, thoughts, intentions, attachments, beliefs, convictions, interpretations of the present, everything. All the contents of our consciousness. The more ‘naked’ we become, the closer we get to this State of Being.

The hall became quiet. Mooji asked whether this Being had a birth. A death. Whether it could be limited. Or finite. Or impressed, flattered, offended. Or whether it could be owned exclusively by any organized religion … Every time, the answer from the hall was “no.” That which remains after we let go of all identifications of our ego, is The Being Present In Our Own Wholeness.

It seemed as though Mooji was giving us a crash course on Enlightenment. He wanted to have us experience transcendence. The message seemed to reach the audience. Seemed, because while Mooji asked us to leave our past behind us for the few hours we were together, the people who wanted to ask questions first started talking extensively about their pasts. And though Mooji asked us not to see him as a guru but to seek our own inner guru, various women in the hall asked if they could hug him as that was their one and only wish. And though Mooji indicated that he had no identity, Indian sitar music was playing for him, probably because it fits the image we have of a guru, though he was originally from Jamaica and spent forty years in London.

Mooji advised us to not just want to taste the proverbial honey, but to be it ourselves. “You become the answer.” He urged us to keep connecting with the Source, the eternal Being, the living experience we had just had. He explained that true spirituality is always simple. It makes your life lighter, more playful and more pure. The greatest discovery will be that everything is already within us. “Your homework is to Stay Home.”

The nicest thing about Mooji was his loving acceptance of the whole event. He regarded us with a lot of tenderness, knowing that the deeper truths require more time to truly sink in. He remained ever tolerant, endlessly patient and royally respectful, even when a man in the hall made a speech and ‘stole the show’ from him. He was more than happy to meet everyone on their own level. “Thank you,” said Mooji. “Thank You.”

The greatest proof that the godly world exists is a person who reflects godliness: as he watched and listened to the people, unconditional acceptance, endless patience and boundless love seemed to pour from his heart. Mooji IS. No concepts, opinions, identifications, annoyances, doubts, judgements, emotions … Only Being. He is the living example of what he preaches. His state of being is his religion. He seems to have found the godliness in his deepest inner self and to have placed his personality in the service of that godly Being.

We have a lot to learn from you, Mooji! Thank you for your inexhaustible patience for everyone and your calm, rock-solid faith in the invisible Light that will eventually let every part of the fundamentally undivided Self come to Self-Realization …

As we returned home, Mooji’s words still rang in our ears: “You are the seeds of Awakening in a sleeping world.” 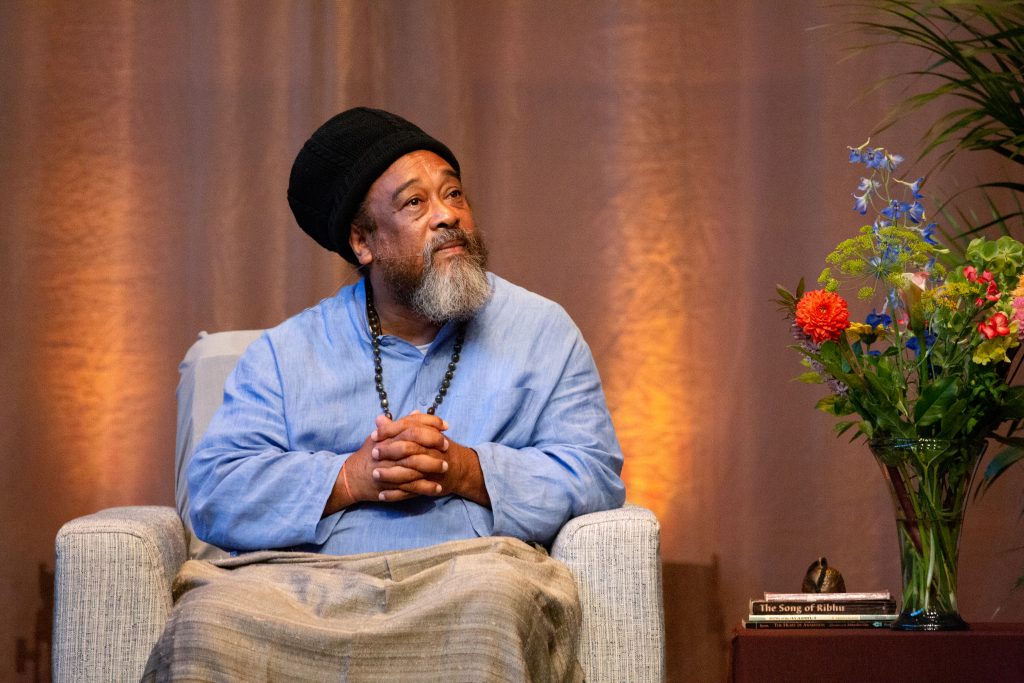 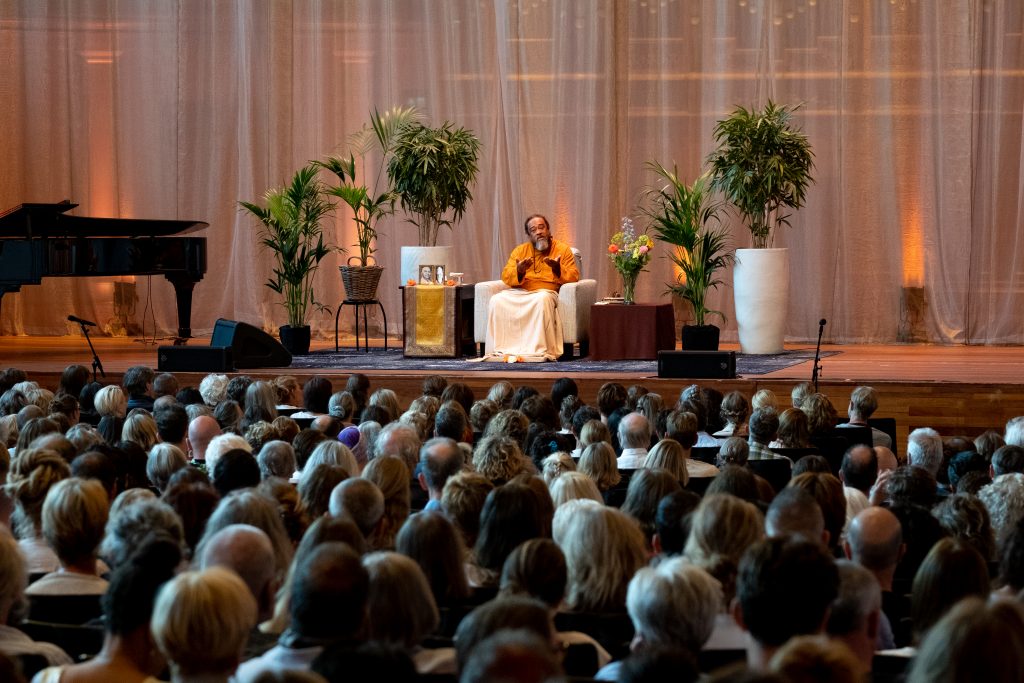 Mooji  in The Netherlands

Get now your Free Happyness courses 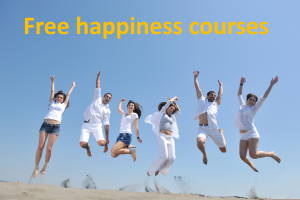 Get your FREE Happiness courses Now

END_OF_DOCUMENT_TOKEN_TO_BE_REPLACED

5 thoughts on “Mooji – Satsang The Netherlands”