Why do people smoke?

Complaints and problems are often a reason for people to start smoking, but a cigarette is not a problem solver. It only causes more problems. Smoking will only increase the risk of depression, anxiety disorders and panic attacks. So why do people start smoking?

Youngsters like to explore their world, which is why they tend to experiment. 11% of all ten year-olds have admitted to experimenting with smoking cigarettes. 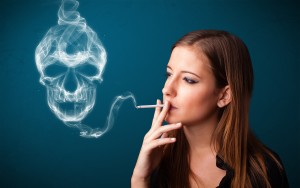 Among sixteen year-olds this is as high as 50%, of which 1 out of 3 has become a daily habit. For six out of ten smoking teenagers, it WILL become an addiction. It is no wonder young people try smoking cigarettes, because most of them go through an experimental phase. But, with over 60% of smoking teenagers in danger of becoming addicted to it, it is important to keep a close eye on this development.

The image of smoking being cool and sexy has played a key part in this development. Smoking used to be seen as manly, but girls have also started smoking at an increasingly younger age. Among teenagers, Smoking is seen as cool and is considered to be socially accepted behavior in their peer groups. All teenagers have a strong desire to fit in, so when their friends do it, they will do it as well. This is what many high school kids think. They also encounter many smoking adults throughout their day,…on the street, at the station or bus stop, they always see adults smoking. So why would they see smoking as a danger?

Some people get more easily addicted than others. Genes are partially to blame for this. Other factors include the combination of marketing strategies and the addictive substances they use and even the environment they live in can play a role in this.

In the USA, 1178 people die each day from the effects of smoking, mostly from lung diseases and cardiovascular disease.

Since most people tend to start smoking at an early age, the European Health Foundation has made a very informative DVD, which will help educate them from an early age (through visuals and animation) of the dangers and health risk associated with smoking.